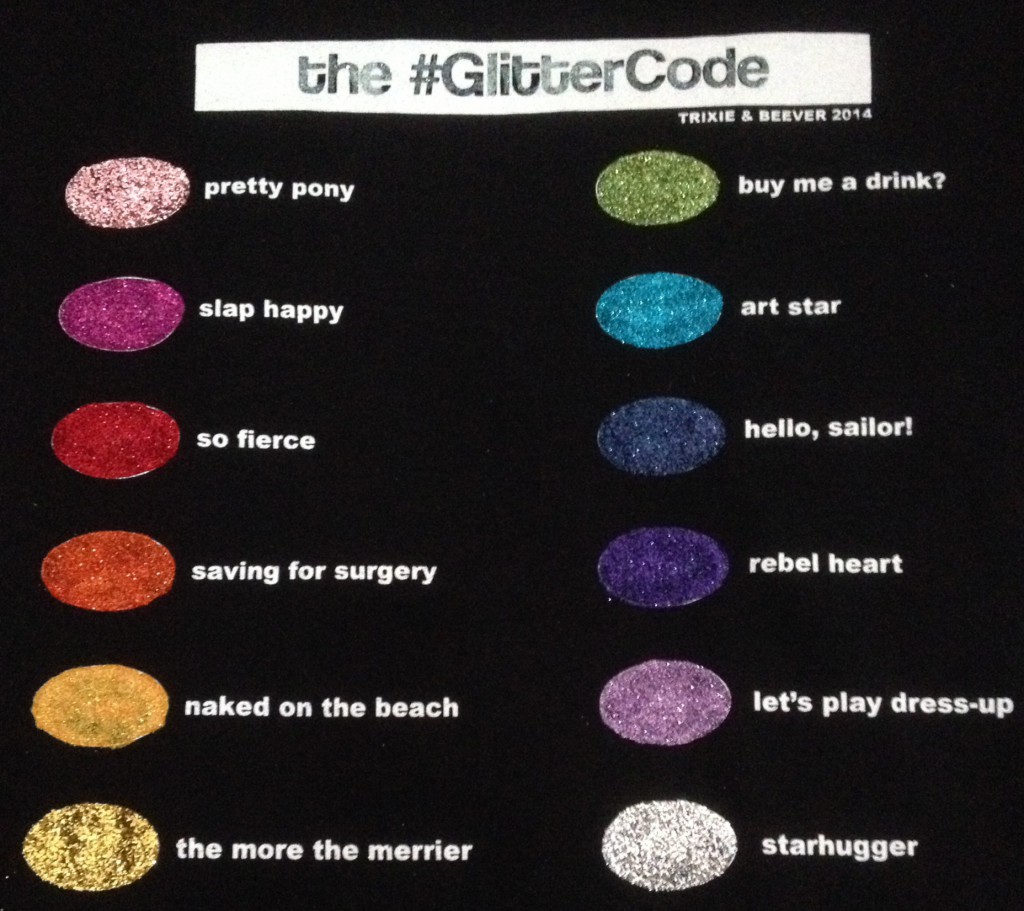 A project possibility was brought to us: something for WorldPride, maybe about the Hanky Code.  (It was an ingenious code – emerging in the 1970’s, but with Gold Rush-era cultural roots – for a subculture of gay men to indicate what one was seeking sexually; to “flag” by displaying a handkerchief/bandana in a specific colour, on a specific side of the body.)

Using text, hand-applied glitter and colour symbolism on hankies and t-shirts, we decided to create our own version, something playful and inclusive of all genders and sexualities. The Glitter Code is based more on personality traits, inclinations and style than specific sexual acts (though you can write that in for yourself if you wish!).

In addition to the hanky code, other sources of inspiration include the rainbow flag (designed by Gilbert Baker; originally 8 colours, now 6), Polari (the secret mid-century language of UK gays), and our own associations, local culture and friends.

Some ideas from the hanky code include gold – threesomes – which we opened up to a general and generous social outlook, and for silver – starfucker – we used a word we coined about a friend’s beaming photos with his celeb heroes.  Of course yellow suggests sunlight, as it does in the rainbow flag; we wanted to impart a sensual enjoyment of nature, and our anticipation of visits to the beach at Hanlan’s.  Hot pink/fuschia plays with multiple meanings: the original version of the flag included pink for sexuality, fuschia hankies implied spanking and in Polari “slap” referred to makeup.

Since the hanky code itself was never universal (there are many variations in specific meanings), it seems appropriate that we may have misinterpreted lime green’s “dines on tricks” to mean that one was particularly interested in having someone else pay for their dinner… but maybe it was about sex play with food.  We’re okay with that kind of messiness, as our Glitter Code only hints at the diversity of desires, characteristics and identities queers can inhabit.  How could you even try to fit all that on a hanky or t-shirt? 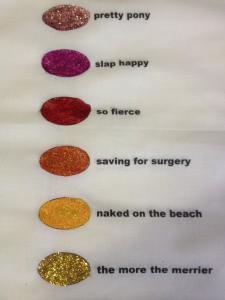 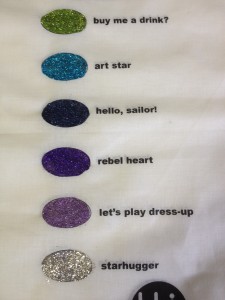