This series proposes to viewers an opportunity to see themselves reflected with the glamourous hair, jewellery and clothing of specific personalities and personas of one particular era.  These pop portraits amp up the razzle-dazzle of already-alluring subjects with the addition of rich colour and sparkling glitter.  Like the reality of imagining one’s self in an idealized fantasy, there’s inevitably a distortion.

We focus on the 80’s because it was a time of excitement and excess, bright colours and daring new expressions of gender creeping into mainstream culture.  We were of impressionable ages; late childhood through the teens, and we were both caught up in and enamoured with the music, movies and television of the time.  Of course it was also a decade of intense materialism and celebrity worship; the debut of “Lifestyles of the Rich and Famous” in 1984 offered viewers “champagne wishes and caviar dreams.”  Some subjects within the series reflect this high-end excess, while some represent a scrappier, street-based style of glamour.

Returning to materials we’ve used before (mirror, glitter, film), we’ve added a hand-drawn element to our established layering techniques.  The combination of coloured ink and different textures/finishes/colours of glitter offer more possibilities than our typical production and we’ve enjoyed the experimentation that has brought us to this creative process.

The choice to show these pieces in a hair salon is a natural one, and in fact the venue inspired the direction of the series.  Our longtime hair stylist and friend Mikah Styles proposed hosting an art show in his lovely new salon Eleven, and we dedicate these pieces to his support, kindness and many years of good hair.
(Bonus activity: use dry-erase markers to draw in features!  Smooth surface can be wiped clean.)
Hairstyles of the Rich & Famous
new works by Trixie & Beever
Eleven
11 Irwin Ave, Toronto, ON M4Y 1L1   map 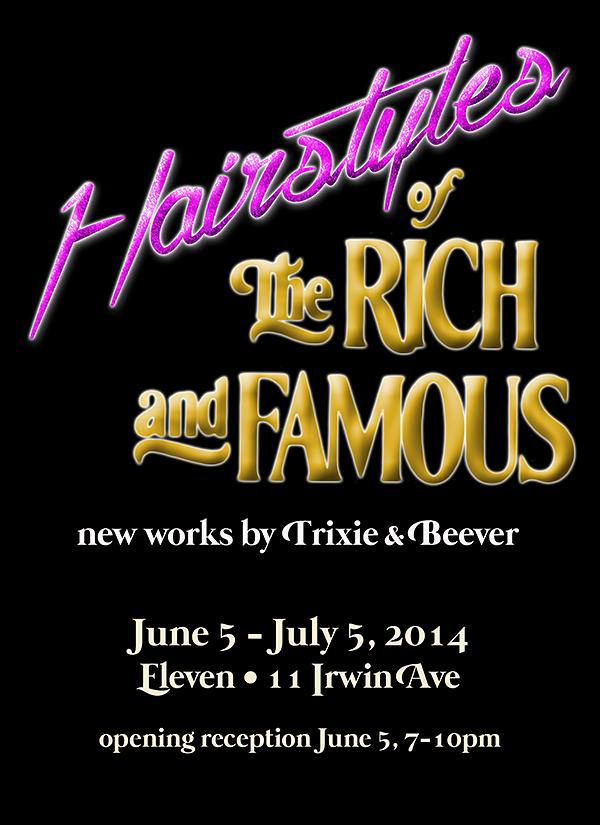